My dad, Simon Lowy, was born July 3, 1929, in the Bronx, NY, to Helen and David Lowy. He had one brother. My dad played ball on the streets—stick ball—they used the sewer tops as the bases. My dad had many friends growing up. 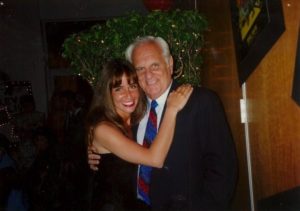 When he was older, his family moved to Miami where he attended the University of Miami. He was then drafted into the Army where he served as a medic. My dad was a proud Mason.  When he returned to Miami, he started a career as a butcher/grocer. Later, he earned his Real Estate license and began his 50-year career in Real Estate as a broker/developer—he retired at the age of 85. He enjoyed traveling, and gambling at his beloved Hard Rock Casino, playing craps and his favorite game Stinkin’ Rich.

Most of all, my dad loved spending time with his family and his grandchildren. He was married to the love of his life, my mom, Doreen, for over 60 years—he adored her. They had a wonderful life and marriage. He was a family man; hard working and very old-fashioned. He loved watching sports and was a huge fan of boxing.  He played cards with the guys on Thursday nights for as long as I can remember and in his later years, he met a group of guys at his favorite coffee place, Einstein’s. He took early morning walks with a few friends until he could no longer walk. My dad lived a full and happy life.

My dad was the single biggest influence in my life. He taught me how to live my life by watching him live his. My dad was my Superhero. My fierce protector. The thing about him was that he never asked for anything, not from anyone. His love was unconditional love—he never judged me—he supported me in every stage of my life. He was my biggest fan. And I was his. My dad taught me resilience. He was my guiding light. He’s the foundation on which I was able to build my life.

My dad was the sun and the moon and the stars, and his heart was bigger than anyone I knew. He was the most generous, giving, kind, warm-hearted man. All my life growing up, he was my idol, and my kids’ hero. We all adored him the most. My dad was always there for me.

Everyone who ever met him adored him.

I could not be prouder than to be his daughter.

On September 21st, 2015, on what was a typical outing for my parents, they had taken the nurse who had been with our family for a long time out to lunch for her birthday. My dad went to the bathroom and when he came out, the nurse noticed a spot of blood on his pants. They went straight to the hospital.

My dad was diagnosed with bladder cancer. To say it shook my/our world is an understatement—these things just can’t happen to someone like my dad. I had never even heard of bladder cancer before.

The doctors gave him/us all the options, but his disease was muscle-invasive, and his bladder had to be removed. There was no other option if my dad wanted any chance at all. He didn’t want to have surgery, but with the slightest bit of hope for more years with my dad, there was no other option. Even though he was reluctant, we told him, “If we can get more time with you, you’re doing this surgery.” The surgery is nothing you would wish for an 85-year-old man, even one in very good health like my dad.

On December 14th, 2015, with my mom, his brother and all his kids by his side, my dad had his bladder surgery.

It was not easy to watch my tower of strength father go through that, including the weeks and months of rehab that followed the surgery. Not once did my dad complain throughout it. Never. Not once, even in his darkest moments. It was something that you never, ever want to see a parent go through. Following the surgery and rehab and for most of the time until 2018 my dad lived a full life. You would never know he had an urostomy. He still went to the casino, out to dinner, visits to his brother and his brother’s girlfriend and always, chasing the ducks in the backyard of his home that he loved so much.

My dad was a pillar of strength- he withstood so much and never, ever let us know the depth of his pain.

My dad was strong and determined not to let his cancer set him back.  Every single day I thank my lucky stars that my dad had the surgery because it gave us more time with him. Every single day was a blessing.

In December of 2018 my dad fell.  He was rushed to the hospital, and they had to put a rod in his hip. Then came the next big blow: they found a second cancer, multiple myeloma. We began another journey, but this one was going to be the hardest of all—and on top of it, my dad was going to be 90.

2019 was a very hard year for my dad. There were many ups and downs.

I live in Connecticut, and I flew to Florida to see my dad as much as I could. I also have two kids—one was just getting into college and one was already there. It was very difficult, but I kept flying back and forth to see him. Every vacation my kids had, we went to visit my dad, their grandpa. We tried to spend as much time as possible with him and we were really hoping that he would make it to a big milestone birthday, his 90th, on July 3rd.  And he did just that! With everyone he loved around him, we celebrated as my dad, my hero, turned 90.

But you could see the decline. I could see it in his eyes.  But he was there, with everyone who he loved.

In October of 2019, I flew down to see him—this time alone. Somehow, I knew this time would be different and I knew, like the many times before, leaving would break me–again.

My dad had declined in health and when I would speak to him, he was there, but he wasn’t really there. The phone calls were mostly me talking and it was rare now that I could hear him speak—if he did, it was a word or two.

During that trip, I took my dad on a long walk in his wheelchair. I think that was the last time he went outside. I told him through my tears as I wheeled him down the street in the Florida sun, which I did so many times before, that it was okay. Whenever he was ready, it was ok… some of the hardest words I ever spoke. I talked to him about the things I wanted him to know and to hear. Mostly, things we had always talked about, but I needed him to hear it again…one more time. I think what was most important to my dad was that me and my two kids, his grandkids, would be ok.  If you could have seen the way my dad’s face lit up whenever he was in the presence of my kids. My dad, my children’s beloved grandpa, had instilled all his love upon us and that would carry us on and hold us up. He had shown us the way and we will never, ever forget that. Or him. I flew back to Connecticut on October 30, 2019.

On November 11, 2019, Veteran’s Day, my beloved hero, my dad, passed away at his home, peacefully, the way he wanted. No words can describe the magnitude of my loss.

It was time for him to go to be with his mom and his dad who he missed so much. The grief can be heart-wrenching still—it comes in waves and sometimes it crushes me and rips me to the core. Other times, I smile because I was the lucky one, he was my dad and what a gift that was.

I know that love never dies. I miss my dad every day, I feel him around me, his strength, his courage, his wisdom, and his light and his love, we all feel him. In the sun, in the wind, and in the stars. I feel his powerful hand on my shoulder. He will forever be our light and we will forever walk in that light.

My mom and I talk about him often. She misses him terribly and it’s hard for her. She lives in the same house they shared together—the house I grew up in. My mom sits in her chair, next to the spot where he always sat, in his chair right next to hers. But his presence is there, in that chair and in that house. I don’t think my mom will ever leave their home.

It’s not easy because with the COVID pandemic, I haven’t seen my mom since my dad’s funeral.

I want to thank BCAN and the support of this group and the research that continues on behalf of every bladder cancer patient.  I pray they find a cure one day.  Orange is the color for bladder cancer—my son proudly wears his orange bladder cancer bracelet since the day of his grandfather’s diagnosis.

I found BCAN when I started doing online research. BCAN has been such a great support in my life. Just the amount of research that they provide, the advice, the support, and the guidance has been unbelievable. They help patients and those who love them know they are not alone.

I’m so grateful that the Bladder Cancer Advocacy Network was there for me, helping me through this process. Having a platform and a place to go to read and to hear other people’s stories was an invaluable resource for my family and me.

If your mom and dad are alive, call them—call every day—because we don’t know what tomorrow brings us. I have no regrets with my dad. We had a bond unlike any other. I know he is watching over my kids and me and will be for the rest of our lives.

Thank you for letting me share the story of my dad with you. I hope everyone has a Superhero in their life like I did.