Bladder cancer is the 6th most common cancer in the US.  Despite this alarming statistic and recent advances in bladder cancer treatment, very little has changed over the past two decades in terms of incidence and mortality rates.

A patient-centered resource entitled the Initiative to Support Patient Involvement for Research (INSPIRE) was recently developed through a PCORI (Patient-Centered Outcomes Research Institute) Engagement Award.  Through previous PCORI funding, BCAN has assembled a group of over 1,300 engaged bladder cancer patients interested in research prioritization: the BCAN Patient Survey Network (PSN). The PSN identified important research topics in bladder cancer that were shared with funding agencies to highlight questions most important to the bladder cancer community. To extend the PSN’s success and harness the enthusiasm from the BCAN patient and caregiver community for engagement in research, a bladder cancer-specific research training program was created, called PEER – Patient Empowerment through Engagement Research Training. This training enabled these patient experts to successfully partner in bladder cancer research and participate in research teams that are evaluating PSN-prioritized research questions.

In the time since the Summit, monthly online discussions have been conducted and PEER patient advocates have worked to address each topic by designing studies from a patient-centered perspective.

Over the past 9 months, a stakeholder group consisting of patient advocates and researchers met monthly to discuss unmet research needs in the advanced stage bladder cancer population. Discussions addressed clinical trial design and incorporation of important patient-centered outcomes within existing studies. Given that many studies are now incorporating health-related quality of life, the working group began to focus on two areas which have not been addressed: financial toxicity related to bladder cancer care and caregiver burden. Although all stakeholders agreed on the importance of understanding and addressing financial toxicity, constructing a research agenda would be challenging. Therefore, emphasis transitioned to better understanding caregiver burden and interventions that could address this problem. Stakeholders constructed a survey to better understand the scope of the problem through asking several questions: is caregiver burden a significant issue in the bladder cancer community? What interventions may alleviate caregiver burden? What resources already exist and are effective? How can interventions be scaled and disseminated to ensure equal access to those in need? Next steps of the group will be to synthesize survey results and design an intervention (which can subsequently be tested). 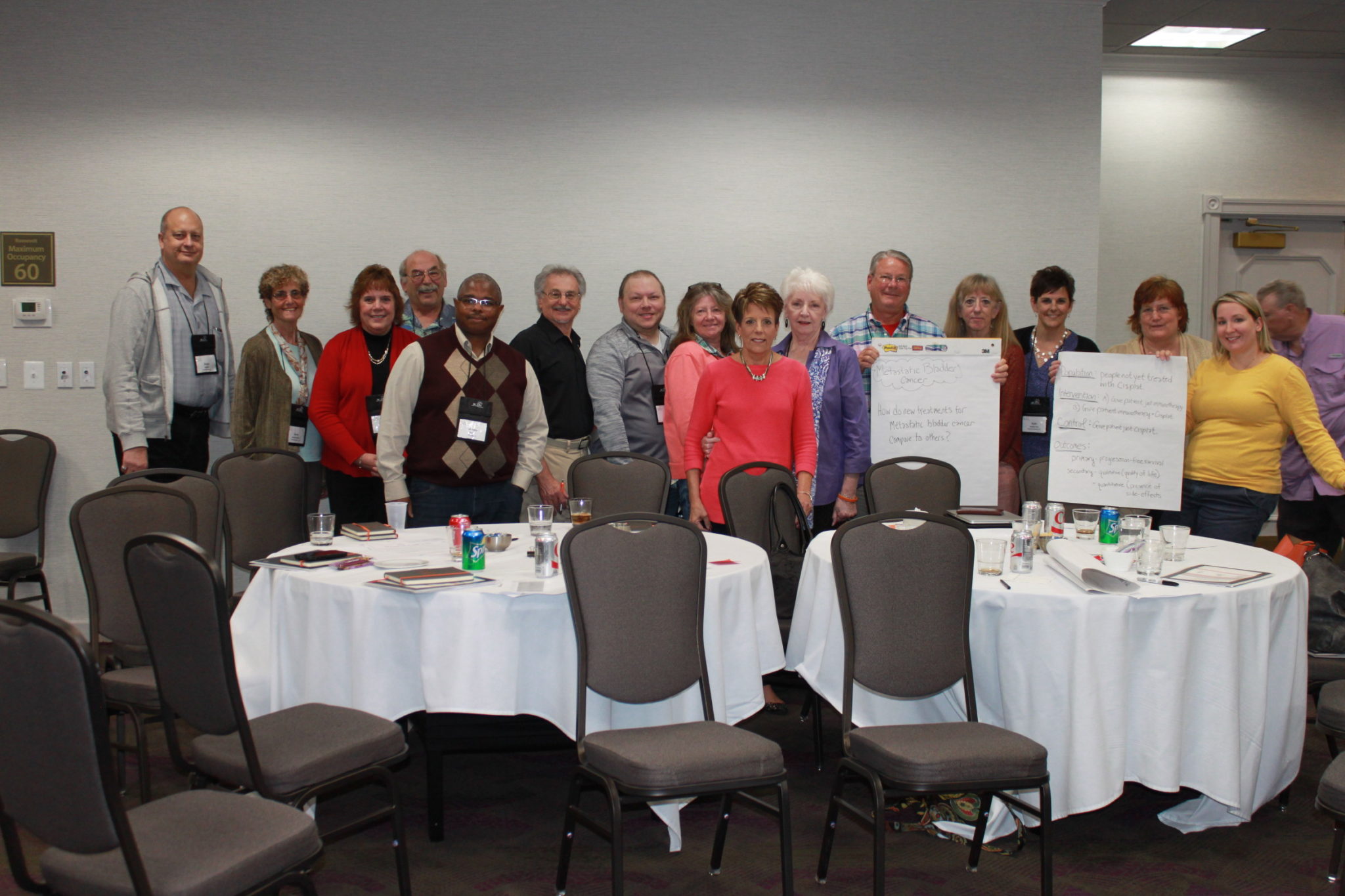 Following the BCAN Leadership Summit in October 2017, a working group of patient advocates and researchers convened monthly meetings to discuss a research program that could effectively address discomfort associated with cystoscopy and intravesical treatment. Stakeholders astutely recognized that we would require a better understanding of the scope of the problem, and spent the last several months designing a comprehensive survey to address several questions: 1) How large of a problem is cystoscopy discomfort? 2) Are there mechanisms that can reduce cystoscopy discomfort? 3) What is currently being used in the community to reduce discomfort? 4) Does discomfort differ based on patient and disease characteristics? 5) What are patient preferences to reduce cystoscopy discomfort? The survey has now been completed with over 400 respondents across the country. Results are being analyzed and will be posted here (and sent to participants of the Patient Survey Network). Patient advocates will assist with constructing these summaries in clear, understandable language. Our workgroup will begin designing a research study to effectively study this topic. A patient advocate group derived from the PEER Scholars at the 2017 BCAN Leadership Summit and augmented with patient advocates who were unable to attend but completed the online training met monthly by web conference to brainstorm research designs that could help patients understand how to decide on therapies for bladder cancer that has become unresponsive to treatments into the bladder with bacillus Calmette-Guerin (BCG). Other stakeholders on the conferences included clinicians, researchers, and staff of BCAN. After initially reviewing available treatments for which comparative effectiveness data may be lacking, the group recognized a gap in the evidence where none of the published trials employed patient-reported outcomes in their trials. Thus, the group conceptualized a study that would compare available NMIBC treatments using patient-reported outcomes. Constructs the group felt it would be important to measure include physical functioning, social functioning, anxiety, depression, urinary function, sexual function, financial burden, and impact of a patient’s caregiver. The group reviewed quality of life survey instruments that had been used previously in urologic cancer studies and selected the PROMIS-29, the EORTC QLQ-NMIBC-24, the Caregiver Burden Scale, and the Comparative Score for Financial Toxicity (COST) for implementation in a prospective observational cohort study. This workgroup is now constructing inclusion and exclusion criteria for the study and testing a web-based interface for the surveys. 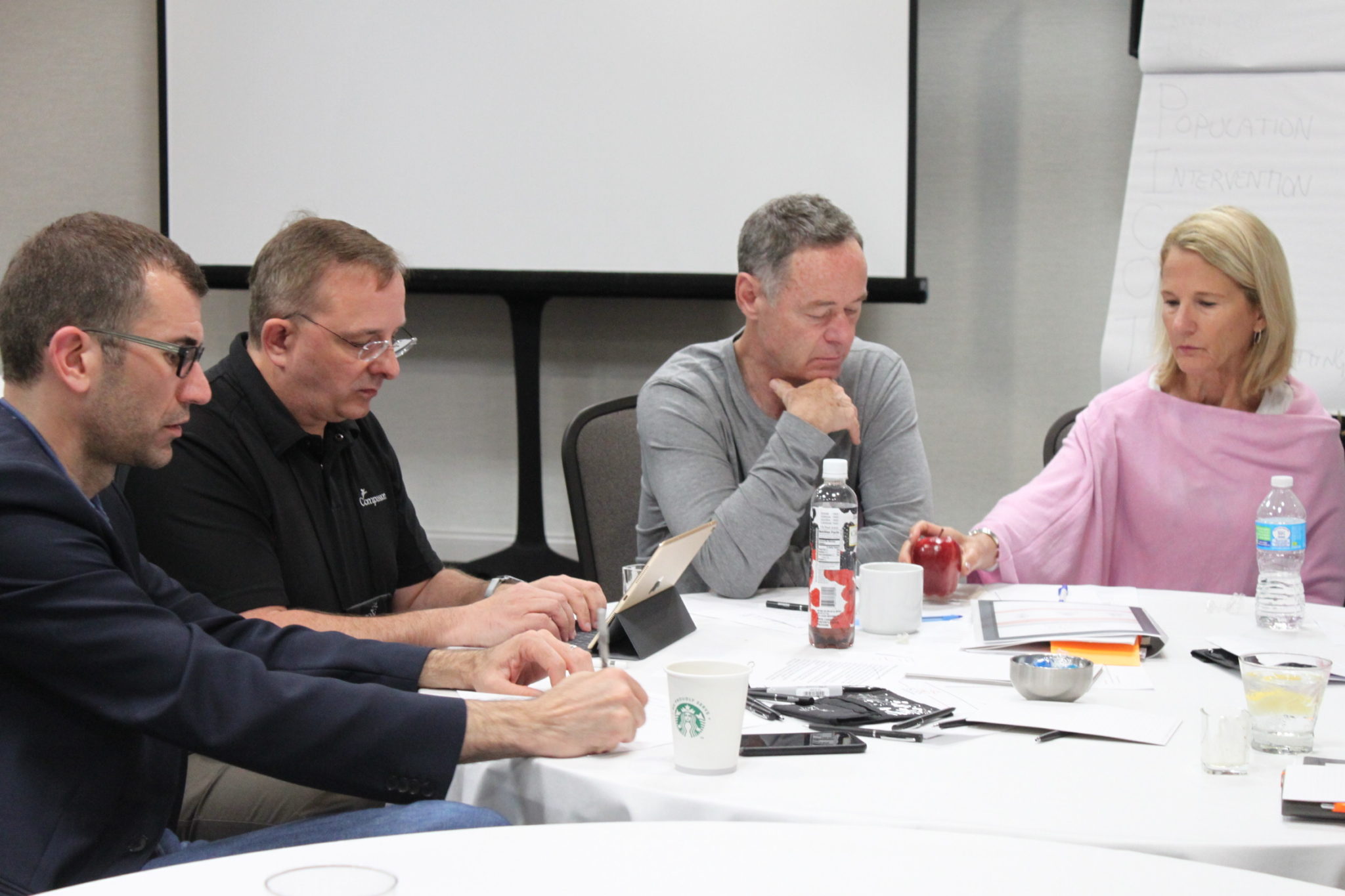